Although Pegoretti bikes are not well known in the UK there are a small group of fanatics that adore the bikes, the history, the production methods and the man behind the company. If you order a bike you can wait up to two years for it to be delivered. Although they are primarily a steel production and are not cheap, the cost is comparable with the top end carbon frames that are mass produced in the Far East and so ubiquitous today.

Dario Pegoretti blurs the line between bicycle frame builder and artist. His first priority is to build a high quality, technically sound racing bike - they have been ridden by many former champions such as Cipollini and Pantani. However the influence of 1960's street art is obvious in his designs and is what makes them so unique and sought after. He is also heavily influenced by music, which continually plays in his studio and many of the frames are named after his favourite songs - Big Leg Emma by Frank Zappa, Day is Done by Nick Drake and Love #3 by Charles Lloyd Drake. He also adds an innovative edge to some of the wilder designs by the use of strange materials such as newspaper, coffee grains and water colour paints. 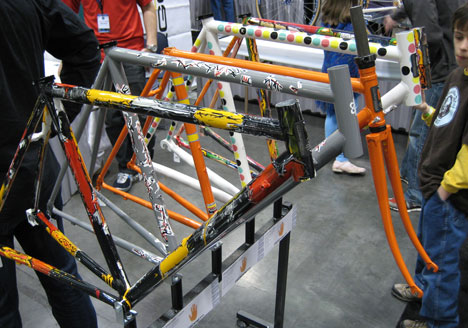 If there were ever a bike that was made for the phrase "You could hang that one above the fireplace" here you have it.

Check out our eye-catching example